A Nigerian man identified as Lieutenant Victor Agunbiade has been heavily praised by the United States Navy for managing its largest overseas cash disbursement office well.

Lieutenant Agunbiade was awarded the Navy and Marin Corp Development Medal for his exemplary accountability. 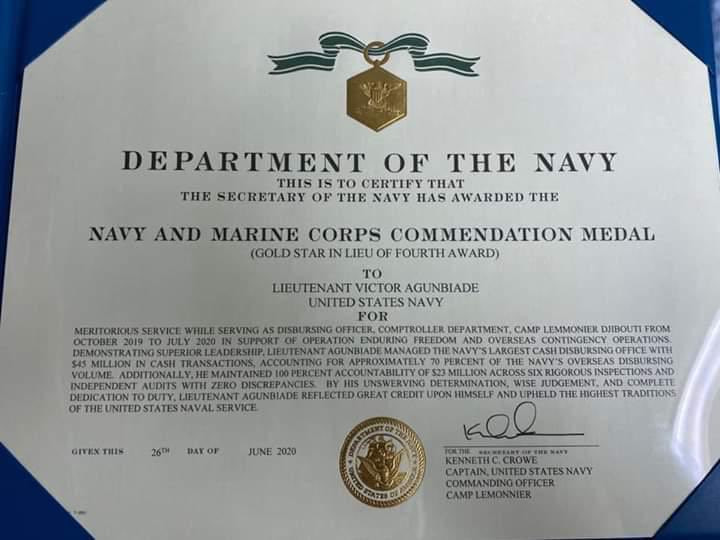 According to the award citation, Agunbiade earned the honor while serving as a cash disbursing Officer at the navy’s Camp Lemonnier in Djibouti, between October 2019 to July this year.

The citation read, “Additionally, he managed 100 percent accountability of 23 million dollars (N8.7 billion) across six rigorous inspections and independent audits with zero discrepancies. By his unswerving determination, wise judgment, and complete dedication to duty, Agunbiade reflected great credit upon himself and upheld the highest traditions of the United States naval service.”

According to the US Navy, Lt. Agunbiade enlisted as a storekeeper in 2008 and was commissioner as a supply corps officer in 2013. He has always displayed a high level of professionalism while discharging his duties.

US, India and Japan Begin Naval Exercises, as China Looks on