The National Judicial Council said on Friday that it had recommended to President Muhammadu Buhari, the compulsory retirement of Justice Mohammed Tsamiya from office- the Ilorin Division of the Court of Appeal. 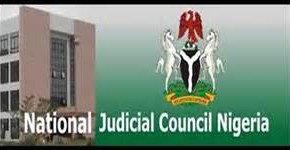 Justice Tasmiya was sanctioned over allegations that he met with a party to a case before him, Nnamdi Oji, three times and on each occasion, demanded the sum of N200m to influence the Court of Appeal panel in Owerri, which sat on election cases that arose from the 2015 general elections.

In a statement by its Acting Director, Information, Mr. Soji Oye, the NJC said it also recommended the Chief Judge of Enugu State, Justice I. A. Umezulike, for compulsory retirement and Justice Kabiru Auta of Kano State High Court for dismissal.

The NJC recommended Auta for prosecution over an allegation that he collected N197m from a man, Alhaji Kabiru, who wrote a petition to the NJC against him.

The NJC said it recommended to Governor Lawrence Ugwuanyi of Enugu State, the compulsory retirement of the Chief Judge of the state, Justice Umezulike, for delivering judgment in a case 126 days after final addresses were adopted by parties, and for other instances of abuse of office.

Justice Umezulike, during his book launch, allegedly received a donation of N10m from a businessman, Prince Arthur Eze, while two cases in which Eze was said to have had â€œvested interestâ€, were in the judgeâ€™s court.

It also recommended to Governor Abdullahi Ganduje, of Kano State, the dismissal of Justice Kabiru Auta.

Kabiru was accused of collecting about N197m from a man, Alhaji Kabiru Yakassai, under the pretext that he had plans to use the money to help a then newly appointed Chief Justice of Nigeria to secure accommodation and for Yakassai to be later rewarded with a contract by the CJN.

The NJC recommended that Auta should be handed over to the Assistant Inspector-General of Police, Zone 1, Kano, for prosecution.

Justice Auta was said to have agreed to refund the sum of N95m to Yakassai, who had petitioned the NJC, but only for him to admit during his probe before the NJC panel that he only agreed to refund N35m.

The NJC said it made the recommendations at its 78th meeting, chaired by the Chief Justice of Nigeria, Justice Mahmud Mohammed, and held on September 29, 2016.

In respect of Justice Tsamiya, the statement read in part, â€œHon. Justice Mohammed Ladan Tsamiya of the Court of Appeal was recommended for compulsory retirement from Office to President Muhammadu Buhari, GCFR, pursuant to the â€˜Findingsâ€™ by the Council in the petition written by Nnamdi Iro Oji against him and Hon. Justices Husseini Muktar, F. O. Akinbami and J. Y. Tukur, all Justices of Court of Appeal, who sat on Election Appeal Panel in the Owerri Division of the Court during the 2015 general elections.

IBEDC says Mowe, Ibafo, Magboro, others to get electricity before Christmas