In a twist to President Muhammadu Buhariâ€™s order for the probe of two former Chiefs of Army Staff, Lt.-Gen. Azubuike Ihejirika and Lt. -Gen. Kenneth Minimah, and 52 others, over arms procurement scandal, some retired military officers and other Nigerians have said that the probe should be extended to the Minister of Interior, Lt. -Gen. Abdulrahman Dambazau (retd.), and the current Chief of Army Staff, Lt.-Gen. Tukur Buratai. 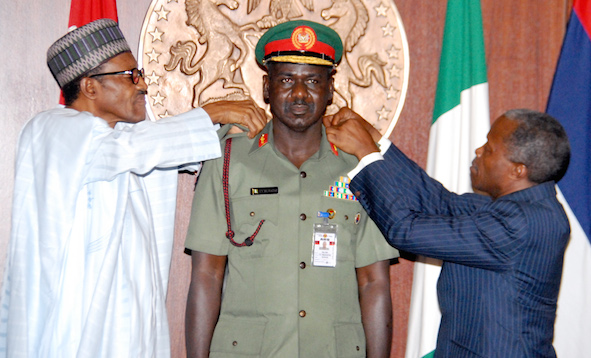 They questioned the exclusion of Dambazau and Buratai from the list of those to be probed when the chief of army staff was the Director of Military Procurement during the period the arms scandal was alleged to have been committed.

They said the call for Burataiâ€™s probe became more necessary given the revelation that the Chief of Army Staff bought $1.5m properties in Dubai with â€œstolen money.â€

According to them, Buhariâ€™s fight against corruption will appear to be one-sided if Buratai is left in his position and not being probed in spite of the allegations against him.

President Buhari had ordered the probe of 54 persons, including Ihejirika and Minimah for their roles in the arms scandals that saw billions of dollars meant for the procurement of arms for the Nigerian military for the prosecution of the war against Boko Haram insurgency diverted to private pockets.

The move had followed Buhariâ€™s approval of the recommendation of the Presidential Committee on the Audit of Defence Equipment Procurement in the Armed Forces led by AVM Jon Ode (retd.).

However, the retired military officers said the Presidentâ€™s war against corruption should be impartially prosecuted. One of them, Col. Kunle Falayi (retd.) expressed support for the ongoing anti-graft war, but urged the President to ensure that it was not one-sided.

Falayi said, â€œBut if it is true he (Buratai) has stolen money or that he partook in the mismanagement of the arms funds, there should no reason why he should be exempted from being probe.

â€œHe should be invited for probe if he has stolen, but if it is found that he has not stolen any money, he should be allowed to continue with his work.â€

On the allegation that Burataiâ€™s total emoluments since he was commissioned in the Army could not support the mansions he bought in Dubai, Falayi said, â€œBuratai should be able to explain how he got the money with which he bought the properties. I have nothing against that; he should be made to explain the source of the money. All I know is that I support President Buhariâ€™s war against corruption, but the war should be total; nobody suspected to have stolen public money should be exempted from probe.â€

Another retired military officer, Col. Tony Nyiam, who commended Buhari for creating the condition engendering the probing of departments of the Federal Government used to be treated as â€œsacred cowsâ€, however, said it would be unfair to leave out Buratai from the probe.

â€œThe Director of Procurement within the period being investigated should certainly be asked to help enquiry or be called in as a witness to give more information or as someone whom the allegations against him should be checked. In other words, the probe has to involve him.

â€œThe President has an opportunity to show that his war against corruption is not biassed because there are so many allegations in the air.â€

In the same vein, a former military administrator, who spoke on condition of anonymity, faulted how Buhari is handling the allegations against Buratai.

â€œThere is no doubt that the anti-corruption war is a one-sided campaign, but even beyond that, there is the issue of lopsided appointments and nepotism in Buhariâ€™s government,â€ he said.

A former Commissioner of Police in Lagos State, Alhaji Abubakar Tsav, who also described the source of Burataiâ€™s wealth as unexplained, asked that the army chief should be probed.

Tsav said the impression given by Buhariâ€™s government so far showed that the administration had been using a double standard on the anti-corruption issue.

He said, â€œPeople are saying that Buratai declared his assets with the Code of Conduct Bureau, but even if he did, how did he get the whopping sum of money to acquire the property in Dubai? How much does he earn in a year?

â€œThese things are unreasonable; the government is giving the impression that it is being partisan and taking sides.

â€œHe (Buratai) should be investigated. If Minimah and Ihejirika will be investigated, Buratai should also be investigated so that we can know the truth. And if the government knows what we donâ€™t know, it should lay it bare to members of the public so that it will be left to the court of public opinion to recommend to the government but taking sides is not good enough.

â€œIf a President comes to serve, he takes the oath that he is going to be fair to all manners of people, so he should be fair to all manner of people. The government said it found huge funds in the farm of a person but it has not told us whose farm it is. We want to know. Is the man a soldier or a politician?â€