The Confederation ofÂ  African FootballÂ  hasÂ Â  unveiled its final five-man shortlist for the 2016 African Player of the Year award. 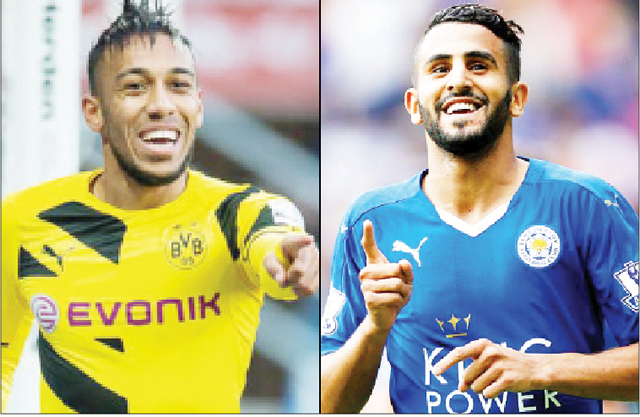 Nigeria trioÂ  Mikel Obi,Â  Kelechi Iheanacho and Ahmed MusaÂ Â  wereÂ  among the 30 players nominatedÂ Â  for theÂ  award byÂ  CAF in October, but theÂ  African football’s governing body on Tuesday dropped them along with 22 others.

Aubameyang, 27, who isÂ  this season’s joint top-scorer withÂ  Cologne’s Anthony ModesteÂ  in the German Bundesliga,Â  faces stiff competition from PremierÂ  League winnerÂ  and the PFA Players’ Player of the Year Mahrez, 25, for this year’s award.

Slimani, whoÂ  joined the Foxes from Portuguese powerhouse Sporting Lisbon on a Â£29.8m summer transfer window deal, has been impressive for his new employers and his country this year.

The jet-heeled forward has Â scored 15 goals in all competitions as well as providing nine assists for his teammates.

Chelsea flopÂ  SalahÂ  has rejuvenated his career at Roma, andÂ  the 24-year-oldÂ  has netted eight Serie A goals this term.

In the African Player of the Year (Based in Africa) category, Denis Onyango, Hlompho Kekana, Keagan Dolly and Khama Billiat from the 2016 Champions League-winning team Mamelodi Sundowns, as well asÂ  TP Mazembe’s Zambia captainÂ  Rainford Kalaba made the list .

According to CAF, the winners will be decided by votes from the head coaches and technical directors of the national associations affiliated to the body.

Russia 2018: Magical Messi gets Argentina qualification back on track